In the movie “The Big Short,” two Chinese characters are displayed in Dr. Michael Burry’s office at Scion Capital. (Blink and you’ll miss them.) These characters—欲 yù and 恐 kǒng—are at the heart of the Wall Street proverb, “Financial markets are driven by two powerful emotions—greed and fear.” 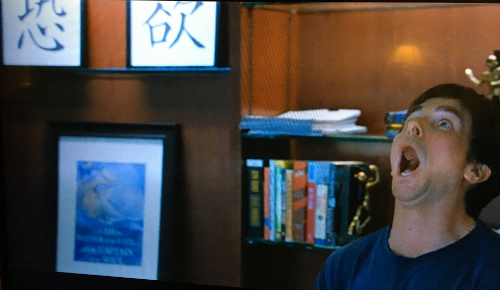 Dr. Michael Burry, played by Christian Bale, is one of the protagonists in the movie “The Big Short.”

Perhaps they really were part of Dr. Burry’s office décor or maybe their role represents a wink and a nod from the screenwriters. Either way these Chinese characters are clever props in the scene.

More about 欲 and 恐

欲 yù and 恐 kǒng are phonetic-semantic characters. That means you’ll find clues to each character’s sound or pronunciation (phonetic) and meaning (semantic) by looking at its parts.

欲 yù combines the two radicals 谷 gǔ (valley) and 欠 qiàn (to lack, to owe). 谷 gǔ is the phonetic part, suggests the sound for 欲 yù (gǔ rhymes with yù). 欠 qiàn is the semantic part and gives a clue the meaning (when you lack something, you desire it).

This site uses Akismet to reduce spam. Learn how your comment data is processed.