7 Ways to Use Brain Rules to Learn Chinese Characters

Researchers say we forget 80% of what we learn in a class within 30 days, and most of the forgetting happens within the first 20 minutes.  How, then, can Chinese language learners expect to remember hundreds of Chinese characters?

In a word, encoding.

Encoding takes place when you learn something new. Your brain processes the new information, splits it up into bits and pieces, and stores it all over the place in long term memory. (Vowels and consonants, for example, are stored in different places!) In his thought-provoking book, “Brain Rules,” brain scientist Dr. John Medina describes it as “a blender left running with the lid off.”[1]

The good news is that, at the moment of learning, the stronger the encoding process, the stronger the connection to the information, and the more likely you are to recall it.  “We remember things much better the more elaborately we encode what we encounter, especially if we can personalize it,” according to Dr. Medina.

So how does that help Chinese language learners?  Here are 7 ways that students—and educators—can use brain rules to learn and remember Chinese characters effectively.

In learning, vision trumps all other senses, and pictures beat text. “We learn and remember best through pictures,” says Dr. Medina.  “The more visual the input becomes, the more likely it is to be recognized—and recalled.”

How to apply it:  Associating a picture with each character you learn helps boost your brain’s ability to recall that character later. Paint a mental picture, search the web for ideas, or use your imagination and get creative.

Our brains are hard-wired to pay attention to things that move.  “We pay special attention if the object is in motion. Indeed, most of the things that threatened us in the Serengeti moved, and the brain has evolved unbelievably sophisticated trip-wires to detect it.” [2]

Add sound and you have an even more powerful learning experience. Studies show that people who learn in a multisensory environment (hearing and sight, for example) do better than those who learn with just one sense. Not only is their recall more accurate but problem solving improves as well.

How to apply it: Motion makes characters memorable, so imagine them, well, moving: heart 心 beating to the sound of a heart beat, fire 火 blazing, and to fly 飞 flying over rooftops.

In their book “Made to Stick,” Chris and Dan Heath offer their Velcro Theory of Memory: “The more sensory “hooks” we can put into an idea, the better it will stick.”[3]

How to apply it: Make a character memorable by learning its origins. China’s writing system, which dates back 3,000 years, is rich with Chinese culture, history, and tradition. Finding a character’s story often has the added benefit of helping you to better understand its meaning and written form.

For example, the character 开 kāi means to open.

Now imagine you’re at home—in ancient China. In front is a courtyard separated from the street by two large wooden doors. At night these doors are secured with a long wooden bar. The bar is heavy, and in the morning you need both hands to raise the bar and open the doors.

The traditional form of kāi 開 represents two hands lifting a bar to open the doors. The simplified version, 开, is the part that sits below the doors.

#4 Associate it with something you know.

Memory improves if we can relate what we’re learning to something we already know. “Information is more readily processed if it can be immediately associated with information already present in the learner’s brain.”[4]

How to apply it: Find ways to use the character in context. The meaning is often intuitive, which helps you to feel more comfortable and confident using the character.

Four words using the character 开 kāi (to open) are shown below. Compare the meanings with their literal translations—they’re very close!

Not all characters and words translate so easily into English (in fact, 开 kāi is a multi-talented character because its meaning changes depending on the object it takes). But these easy one-to-one translations reinforce the character and its meaning and lay the groundwork for more challenging ones.

How to apply it:  There’s a reason why telephone numbers were originally seven numbers. That’s because seven (plus or minus two) is the number of things we can keep in working memory at one time. Chunking can increase that number. Chunking means grouping smaller bits of information into meaningful categories to make them easier to remember.

In “A Radical View” shown below, radical characters are categorized and color coded by theme.  For example, Nature includes characters for earth, sun, and mountain. Body includes hand, face, and heart. Animals include cow, sheep, and bird.  Characters shown in large font provide an added visual cue—they are among the most frequently-used radicals as building blocks to make many other characters. 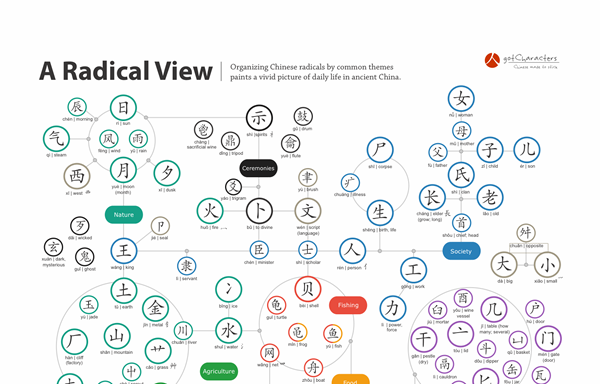 Once you know radicals, it makes learning Chinese characters easier. For example, the character 看 kàn means to see, to look at. It is the hand radical 手 on top and eye 目 on the bottom, like covering your eyes with your hand to see better. 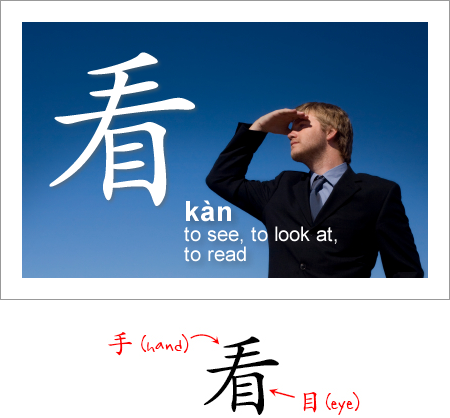 Every character has a Family Tree. There are parents and grand-parents, children and grand-children. Some characters have big families, some small.

Knowing how big or small a character’s Family Tree is gives you a heads-up on how often you may be seeing it in other characters. And it can provide insight into recognizing the character’s footprint and whether it provides the sound and/or meaning in its offspring.

How to apply it: This is the Family Tree for 戈 gē, a dagger-axe dating back to ancient China. It’s not a character you’d see in use today. But looking at its Family Tree you can glean lots of information.

Take the character 戋 jiān, which means narrow, small. 戋 jiān appears in five other characters, always on the right side. In each case, 戋 jiān suggests the sound (jian or rhyming qian and xian), and the characters on the left side suggest the meaning:

Remember the children’s magazine, Highlights? A kid-favorite was Spot the Difference, where you had to find the differences between two seemingly identical pictures. It’s like that for Chinese characters. You’ll come across characters that appear very similar and can be easily confused with each other.

How to apply it: Can you spot the difference between the characters 我 wǒ (I, me) and 找 zhǎo (to look for)?

They look alike, right?  The radical 戈 gē (dagger-axe) is on the right side in both characters, and both have the hand radical  手 shǒu on the left.

But here’s how they’re different: First, 我 wǒ has the full form of the hand character 手, and 找 zhǎo has the short form 扌. And second, in 我 wǒ, 手 and 戈 share a stroke.

If you know your radicals, you’ll develop a discerning eye; once you find the differences between two characters, you’ll never confuse them again.

Hermann Ebbinghaus, a German psychologist, is the researcher who first discovered that we forget much of what we learn within days. But he also found that we could remember more by repeating the information over time.

So remember to repeat.  Make it a point to review characters in order to reinforce what you’ve learned. Next time you check your cell phone or pick up your tablet, practice characters with flash cards, play a Spot the Difference game, read a story in Chinese, or take a pop quiz.

Learning Chinese characters, like any other challenge, is a marathon, not a sprint.  Spend some time with them, and eventually you’ll know them like the back of  your 手 shǒu.

This site uses Akismet to reduce spam. Learn how your comment data is processed.